On a cool, brisk, and beautiful October day late in the afternoon, we set foot to the historic Bachelor’s Grove Cemetery. It’s known as one of the nations most haunted cemeteries according to several sources. The cemetery is part of Rubio Woods Forest Preserve officially located in and around Midlothian Illinois. The cemetery has been in the news and documentaries – the most recent being featured in Ghost Hunters in 2012. Since its last public featurette, the cemetery has lived a very quiet life in recent media.

Bachelors Grove Cemetery has 150 documented burials. The first burial was in 1844 and last in 1965. The cemetery is named bachelor due to the interesting amount of single men buried there. Rumor has it that Bachelor Grove Cemetery was a body dump for many mobs and a-like criminals over the century. While we won’t get into detail the many superstitions the cemetery holds, we will share our enlightened experience.


There are no signs leading to the cemetery entrance. It’s actually well-hidden if you don’t know where you’re going. The cemetery entrance is across the Rubio Woods parking lot – which is across 143rd (Midlothian Turnpike) street. There is a lot of available parking in this lot so if you plan on driving this would be a good area to park. Across the parking lot is a neighboring field with benches available for events and is frequently used by the public. We reached the cemetery biking the Orland Trails path which connects to the Rubio Trails path. Do not come to the cemetery past dusk. Forest preserve cops are like wasps here at night – especially closer to Halloween. If you dare go at nighttime, you might want to check out the cemetery first in the daytime – get me? 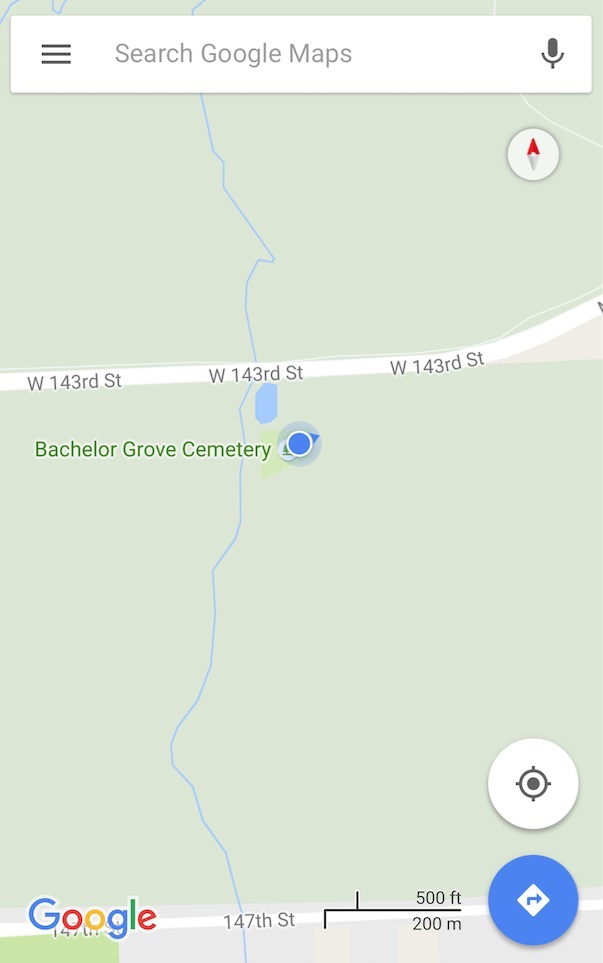 We made our way down the cemetery entrance path by bike. The path had broken concrete, but was good enough to ride on. As we approached the broken fence and entrance to the cemetery, we couldn’t help notice the beaten path and mud continue leading us straight past the cemetery. We followed the path about 60 feet more straight before we were stopped by a natural flowing stream below us some 15 feet. From here, the path broke off to the left along the stream for some distance, but we didn’t venture on it - it being very muddy.

We turned around and walked back toward the open fence and entered the cemetery. About 4 others were here dwelling but not taking any pictures I could see. The fenced in area seems larger than when we’ve seen in photos. There was a tombstone with graffiti on it and seemed recent. The other tombstones in the gravesite all looked like they were moved around, leading the impression of grave robberies. We noticed one man cleaning and moving around some fresh flowers on a tombstone. There were 2 garbage cans setup alongside (outside the fence, most likely out of respect) the fenced area.

We walked down toward the swampy pond which really looked like pure filth. There was no smell. From here, you could clearly see 143rd street and cars passing by.

And that was that. We didn’t feel uncomfortable at any point entering and leaving the cemetery (maybe because others were there at the site too) and at no point did we see anything unusual. The cemetery actually looked beautiful the day we visited. It was a clear bright fallish’ day with tress showing rich colors.

Perhaps the photographs we took might show something we didn’t see originally? Heh.